Designer brands often get inspired by something or someone before creation. It could be a specific era or certain someone. Whenever someone has an image of a small pair of round sunglasses with thin frames and dark tinted lenses, we can't help but think of one person: John Lennon.

This style is trendy in itself. In modern times, you can now find them in multi-tinted colours to hit that visual aesthetic appeal. So, what's their secret? How can a pair of shades be so popular to a point where they're still wanted by many years later? We're here to dive deep into John Lennon: the musician and the sunglasses.

John Lennon was an English singer. He famously founded a legendary band named "The Beatles." Some people like to call him the man behind the "Beatlemania." Early on his career, Lennon was musically inspired by Elvis Presley. He later collaborated with Paul McCartney. Who knew this pair would form one of the most successful bands ever?

During the '60s, The Beatles were extremely popular: in the music industry ad with the ladies. Their loving fans went crazy for songs like "She Loves You" and "I Want To Hold Your Hand." So much so, the intense fan frenzy was confined 'Beatlemania' and is reminisced even to this day.

After releasing their last recorded album as a band, "Abbey Roads" in 1969. John Lennon went on to excellently collaborate with other musicians like Elton John, David Bowie and his wife Yoko Ono.

The couple made headlines during the Vietnam War with a peaceful protest contrary to the war known as 'bed-ins.' John and Yoko sat in bed for two weeks at a time, sought demands to stop the war. The activist and the iconic singer had a tragic end after being assassinated by a crazy fan.

Yet, John Lennon lives on today because of the musical work and the John Lennon Wall in Prague. The famed wall serves as a symbol of peace, non-violent rebellion, free speech, and memorial. 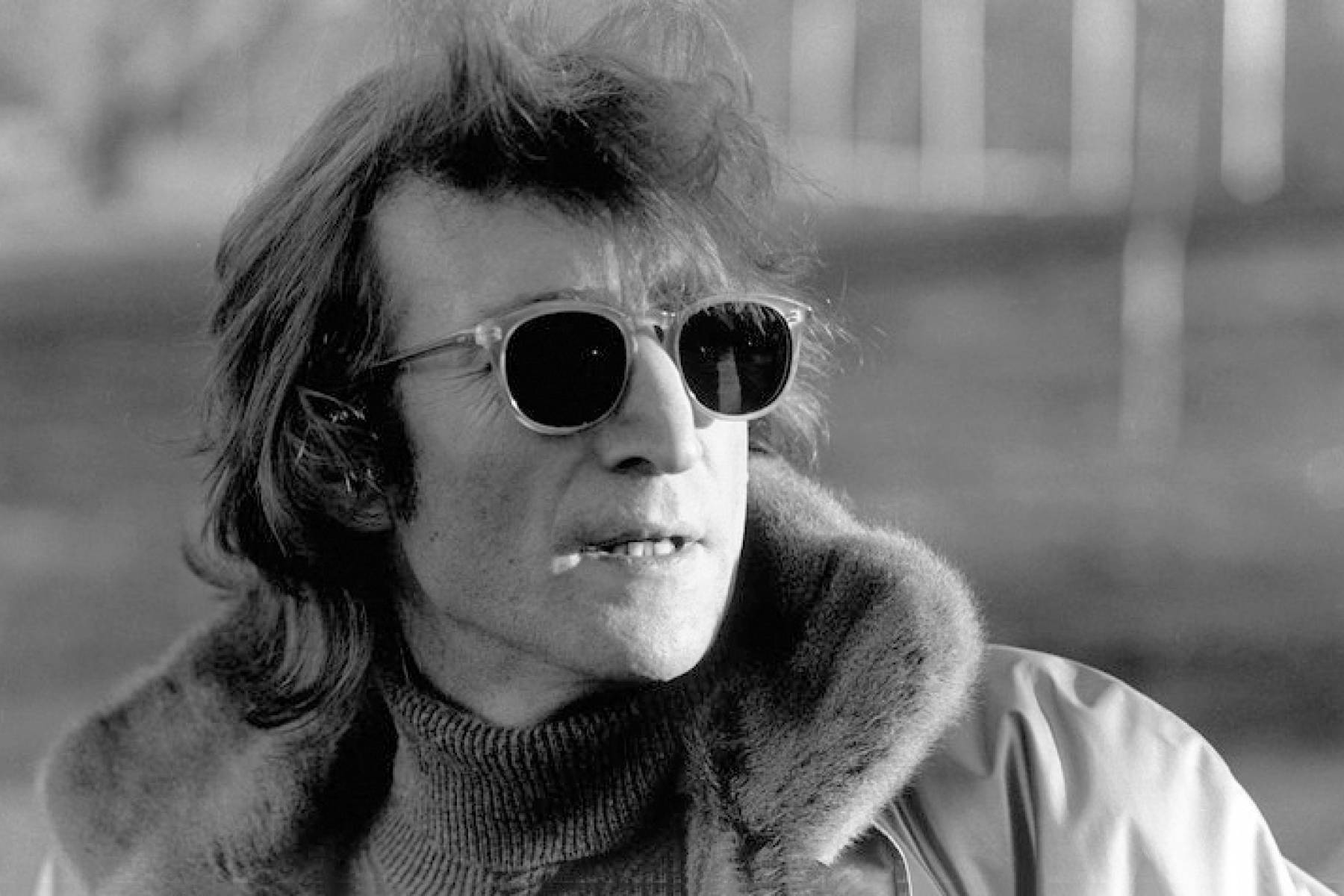 Initially, tea shade sunglasses were made from perfectly round lenses and thin wireframes. They came out strong during the 1960s. Pop culture legends of that era adopted the round Lennon specs in their own way like Ozzy Osbourne. In the past few decades, celebrities have joined the retro round club which immediately made some eyes turn like Mick Jagger, Liam Gallagher and Roger Daltrey. Even pop star singer, Lady Gaga, was spotted wearing the Lennon frames in her publicity shots. All those who previously worn the John Lennon small sunglasses contributed to the late musician's style and success. There is no doubt about that.

These glasses are not only limited to the music industry. It is also well-followed in television and movies. Actor Collin Chou who plays Seraph in "The Matrix" series wore the sunglasses in the movie. So, the specs can be a source of attraction for people of all ages!

Sometimes great styles become popular and trendy. It all started in the 1960s and continues till this day. The John Lennon frames are among the most popular sunglasses styles of all time. The English icon not only made history with music. But, with authentic and unique fashion style too. Worn in different frame materials and colourful lenses, the tea shade sunglasses will forever be a fashion staple. 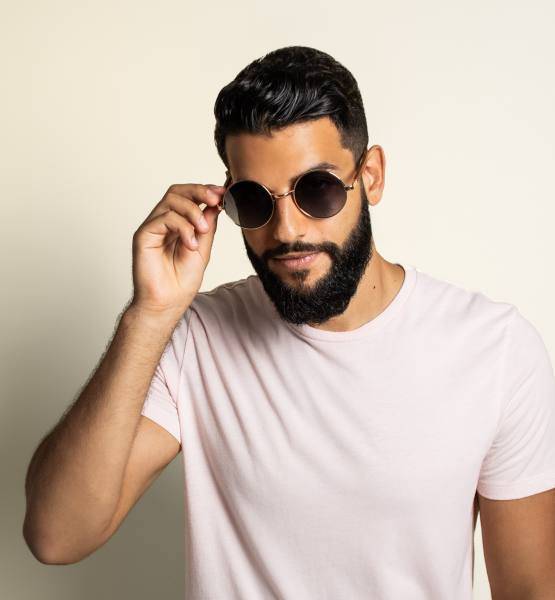 John Lennon's sunglasses bent around the bridge of his nose and linked two circled lenses that were somewhat larger than traditional Teashade sunglasses. In the last few decades, there have been several replicas of the iconic frames. These variations play with colours, frame shapes and materials, just like the artist had done himself when Teashade sunglasses became so popular. But one thing for sure, no other specs are that fashionable and stylish like a traditional pair of Lennon sunglasses.

Many styles from the 60s and 70s have made a comeback such as - denim jumpsuits and bell-bottom flares. But, when it comes to accessories, the John Lennon fashionable sunglasses have never really been out of style. They have always been everywhere in one form or another.

Vintage round sunglasses take on different types, yet they remain strictly loyal to the "rebellious" design. There is even an entire collection of retro-round sunglasses that deviate somewhat from the traditional Lennon style sunglasses. However, this collection continues to boost inspiration from the timeless look. 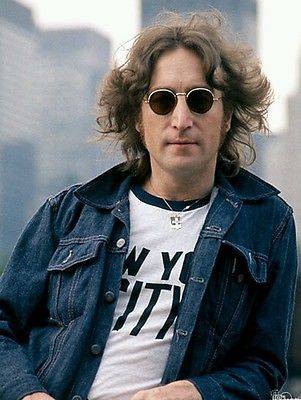 Tea shade sunglasses defined John Lennon very much that even when he tragically died, his partner Yoko Ono began wearing them regularly. She knew how to preserve the shining memory of her previous husband.

On October 9, 1985, the Japanese artist and musician inaugurated the "Strawberry Fields Plaque," a monument in Central Park, NYC, where the English songwriter was shot to death. The name is based on the famous Beatles song with the same title. It shows jerry-rigged tiles on the floor of the park where black stones form the word, "Imagine." It quoted John Lennon's most famous song and became recognized as the "Imagine mosaic."

To this day, many people perform the Beatles' and Lennon's songs in this special place as a tribute to the late singer. They remember this legend through music and fashion after more than forty years since he left this earth on December 8, 1980. 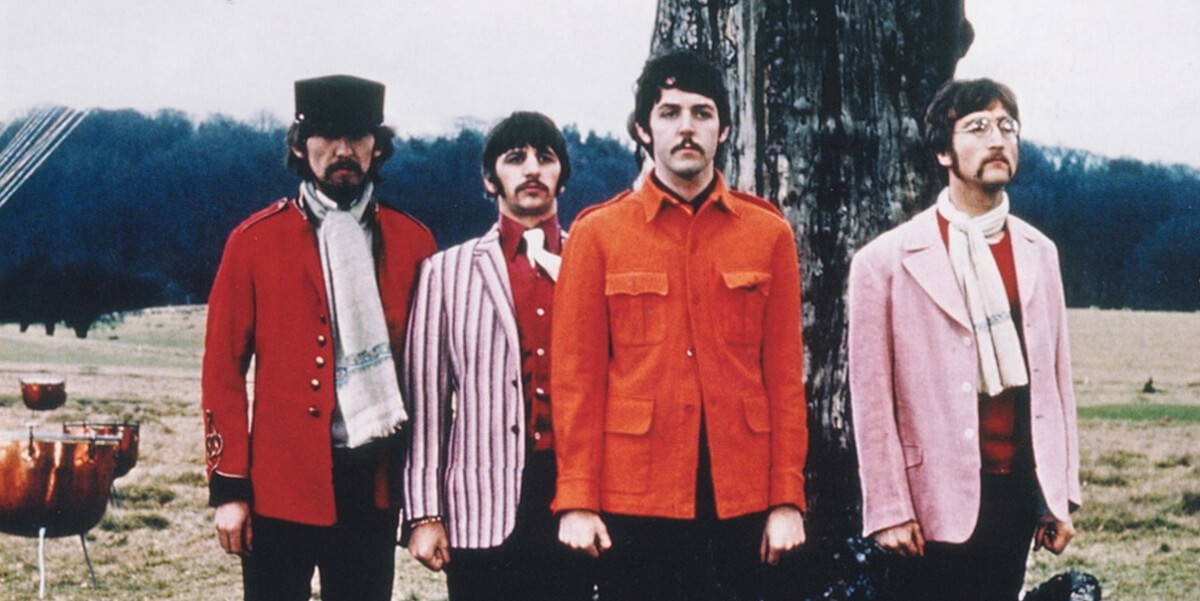 Shopping for sunglasses can be a bit tricky. We may have our eyes on a pair of shades but as you know, you can't always get what you want. One thing you need to keep in mind is that the sunglasses need to work well with your face shape. It's all about balancing your facial features. We don't want anything to look too big or too small. If you want to find our more about that matter, you can read our previous blog about finding your face shape. Now, let's uncover the sunglasses inspired by John Lennon.

Our Lennon sunglasses are not named after the legend for no reason. Every aspect of these sunglasses is inspired by John Lennon's iconic round sunglasses, from the shape, to the colour of the frame and the lens tint.

These John Lennon inspired retro-round sunglasses are designed with a polished gold metal frame and a curved bridge and feature slim Zebra Wood temples for a retro vibe and unique and alluring finish. The retro purple gradient lenses on these Lennon sunglasses also have the '60s and 70's colour vibe, inspired from when John Lennon started to rock this style. 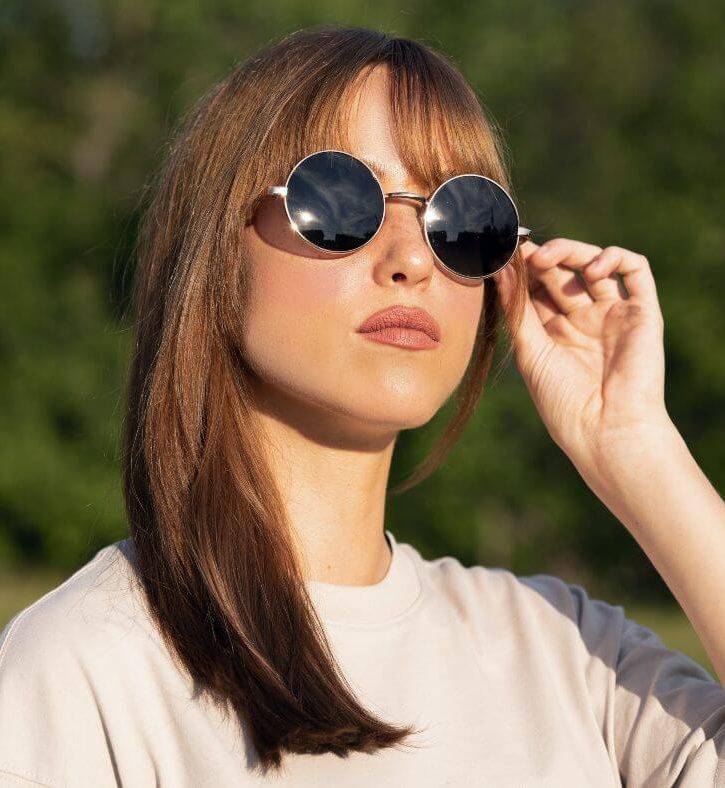 The Jazz sunglasses are very much inspired by the John Lennon sunglasses fashion. The singer made round glasses unforgettable by wearing them on the front cover of the "Imagine album." In the official video of that song, John is sitting behind a piano, performing his most legendary song "Imagine" wearing a version of these glasses with orange-tinted lenses.

The trendy retro-round Jazz sunglasses are designed with a translucent brown frame, a keyhole nose bridge and slimline wooden arms for an irresistible John Lennon throwback look. Equipped with brown lenses, these fun and bold sunglasses combine contemporary styling and a retro flair to shade your eyes from the sun in Lennon fashion.

The Aspen Gold Sunglasses are yet another pair that you can opt to channel your inner Lennon. These retro-round sunglasses boast the classic round shape that was always worn by the English singer.

The round frame is accentuated with the charming brown tones of Ebony Wood around the lenses and features a gold metal rim with a standout double-bar bridge. Featuring dark grey polarized lenses, these lightweight shades are the perfect pair for a vintage-inspired look to protect your eyes from the sun. 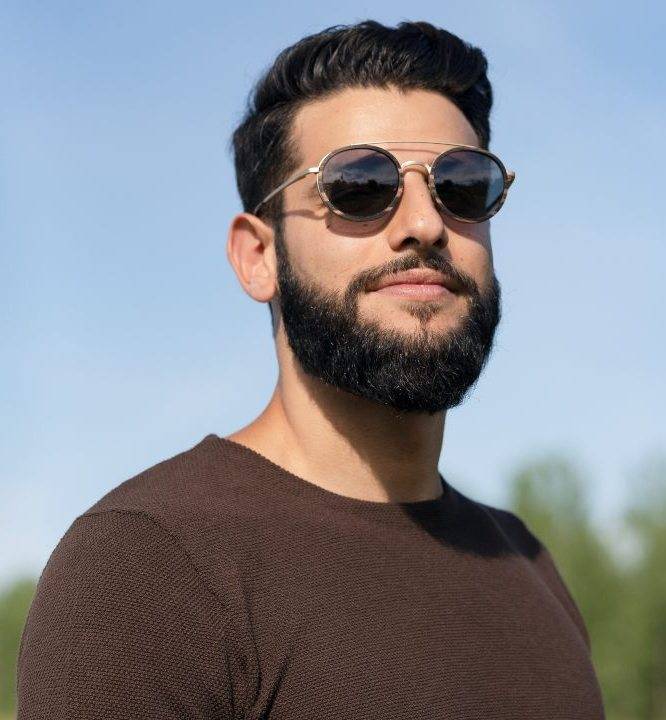 Not to steer away from the Aspen sunglasses, but we have another color ready to be worn by you! If you happen to love the one mentioned above, you're going to get obsessed with the Aspen Silver Sunglasses. The retro-round sunglasses will elevate your style and your entire outfit in a few seconds.

They are made from Swiss Walnut Wood making them lightweight and sitting comfortably around your eyes. Should you wish to look for a vintage-inspired frame, the silver one, featuring dark grey polarized lenses, will be your go-to pair for all your summer plans and activities. 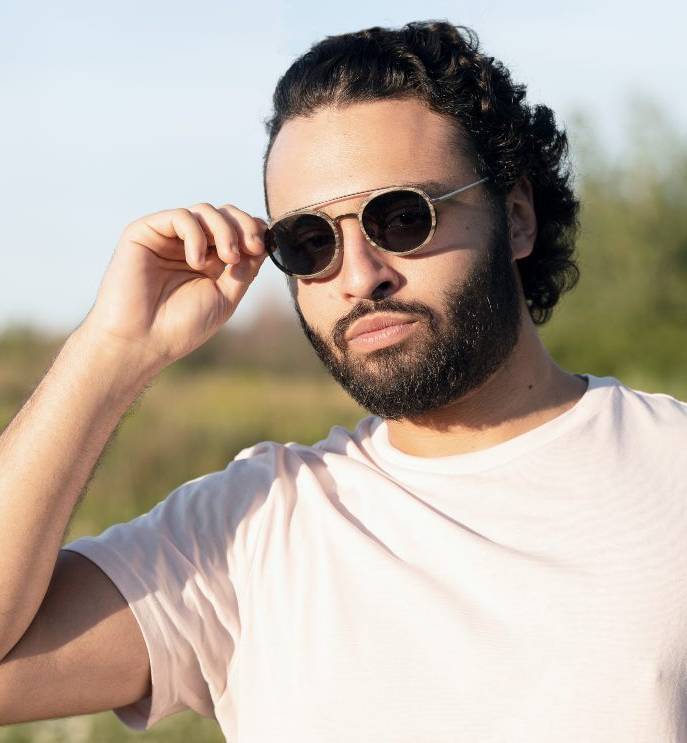 It's crucial for any type of fashion item to match your sense of spirit and personality. You are what you dress, are we right or not? Your entire outfit, including your sunglasses, can speak on your behalf to the world. So, are you willing to show of your crazy vibes with Groove sunglasses?

These clear framed sunglasses will clear the path for you to own the street with a captivating look like no other. They are designed with Zebra Wood temples combining vintage with contemporary features. The specs feature polarized silver mirror lenses for an optimal coverage in the sun. 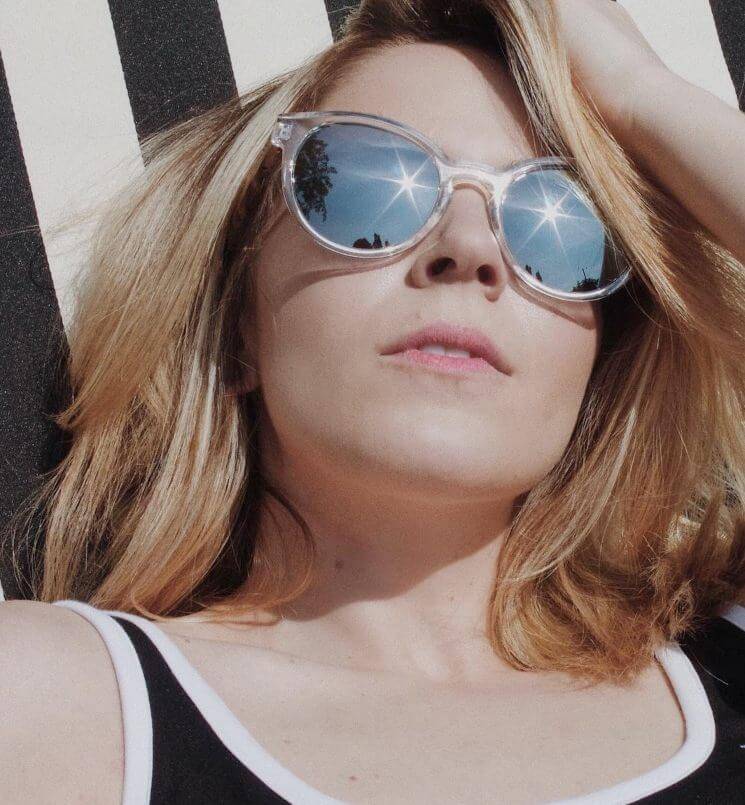 Aren't you feeling the Lennon vibes with every sunglasses mentioned? Just you wait, we have one last choice for you! If you're a fan of the round frames and looking for a little mix in colour, look no further than the Roseland sunglasses.

They offer all the needed coverage from the sun's harmful UV rays. These retro-round sunglasses are designed with a keyhole bridge combining Ebony Wood and Rosewood. You heard us correctly, the last pick is a two-tone, high quality coloured frame. Do you want an upscale feel? Make your way towards Roseland. 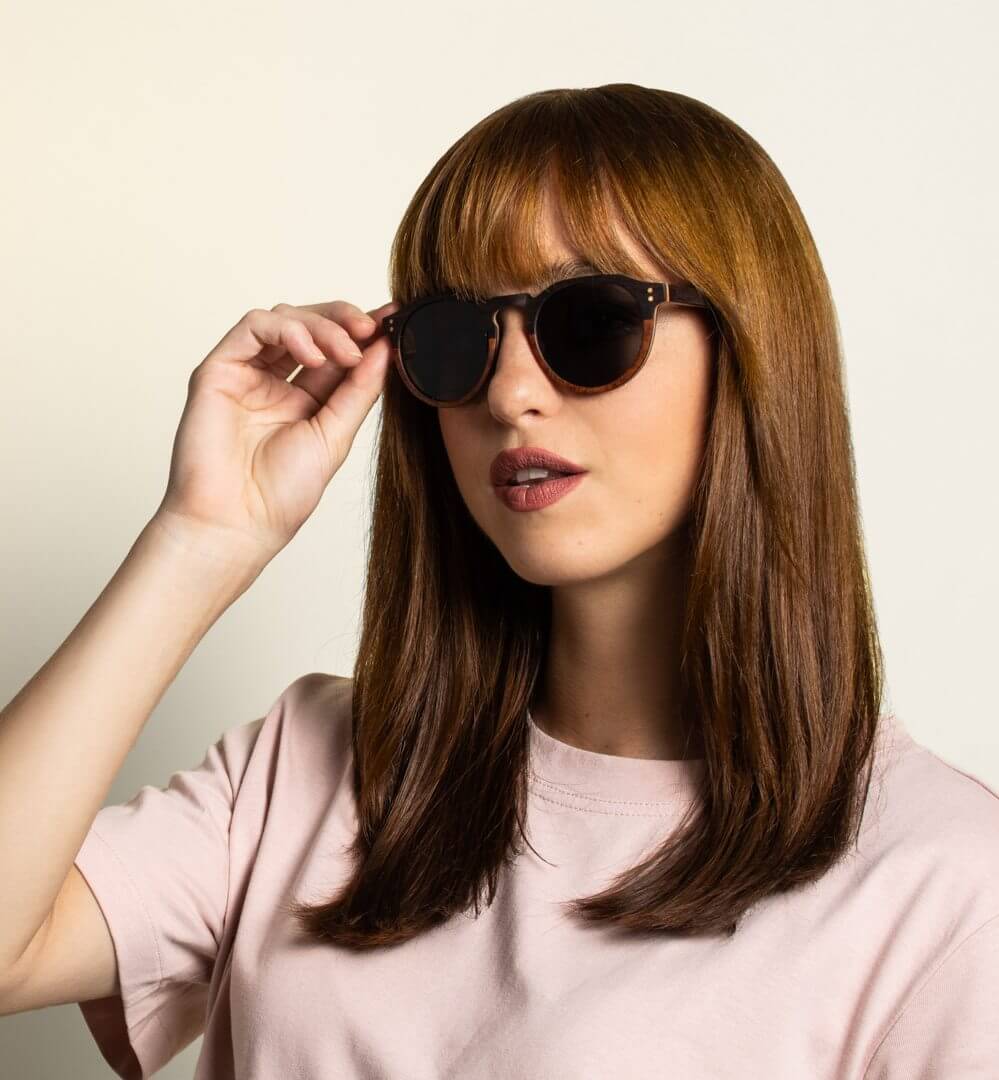 It's been fun looking back at how the journey of the John Lennon sunglasses started. He, himself, made round eyewear a fashion trend so strong that is still present to this day. You can never go wrong with a pair of round sunglasses to enhance your outfit and add a fashionable touch to your look! For a more bold and colourful choice of eyewear, you can check out our previous blog about Elton John and our Elton-inspired sunglasses collection.