Have you ever realized the dangerous effects of sunlight and artificial lights coming from digital devices? From TV screens, cellphones to all types of digital gadgets around us, visible artificial lights are harmful. Even so, just by being outdoor in the sunlight or sitting in front of the computer can expose our eyes to visible light rays that have a range of side-effects on the eyes.

Just how damaging can the sunlight’s invisible UV rays have on the eyes? We’ll deal with that later. But, did you know that they have serious damage to the skin too? Not just invisible UV rays, we’re talking about the visible light rays released by the sun. They include a range of different coloured light rays such as blue light.

Here’s the good news thought, you can protect yourself with a pair of stylish wooden sunglasses that blocks blue light along with all visible light rays. Let’s explore everything you need to know about blue light and how can sunglasses block blue light.

1. What is Blue Light Glare?

Sunlight is made of red, green, orange, yellow and blue light rays along with many shades of these colours, depending on the wavelength of the individual beams and energy. Some people know wavelength as electromagnetic radiation. In combination, this range of coloured light rays generates what we call "white light" or, in other words, sunlight.

However, there is a reverse connection between the wavelength of light rays and the extent of energy they hold without any complicated physics. Light beams that have relatively long wavelengths have less energy; On the contrary, short wavelengths have more power. Rays on the red end of the visible light range have lengthier wavelengths and less energy.

As for blue light, it has very short, high-energy waves. They are slightly longer and less powerful than ultraviolet waves, which are dangerous too. Health experts warn against the high energy blue light waves. Blue light is everywhere around you. The sun emits blue light so do digital devices, hence the need for blue light glasses. Human beings are exposed to more blue light than ever because of the widespread of the LED technology.

2. What are Blue Light Glasses?

Now that you have an idea of what blue light is and where it comes from, you can start realizing the importance of protecting your eyes against it. How can you do so? With glasses of course! Polarized sunglasses can help you block out the UV rays, but there are also blue light glasses that can be prescribed and made for you.

So, to come to the understanding of the term, blue light glasses like the Joy Rose Gold Eyeglasses, are glasses equipped with blue light blocking lenses that contain a special filter to shield your eyes from the harmful blue light emitted by computer screens and other digital devices. The good news is blue light glasses are available with or without prescription. 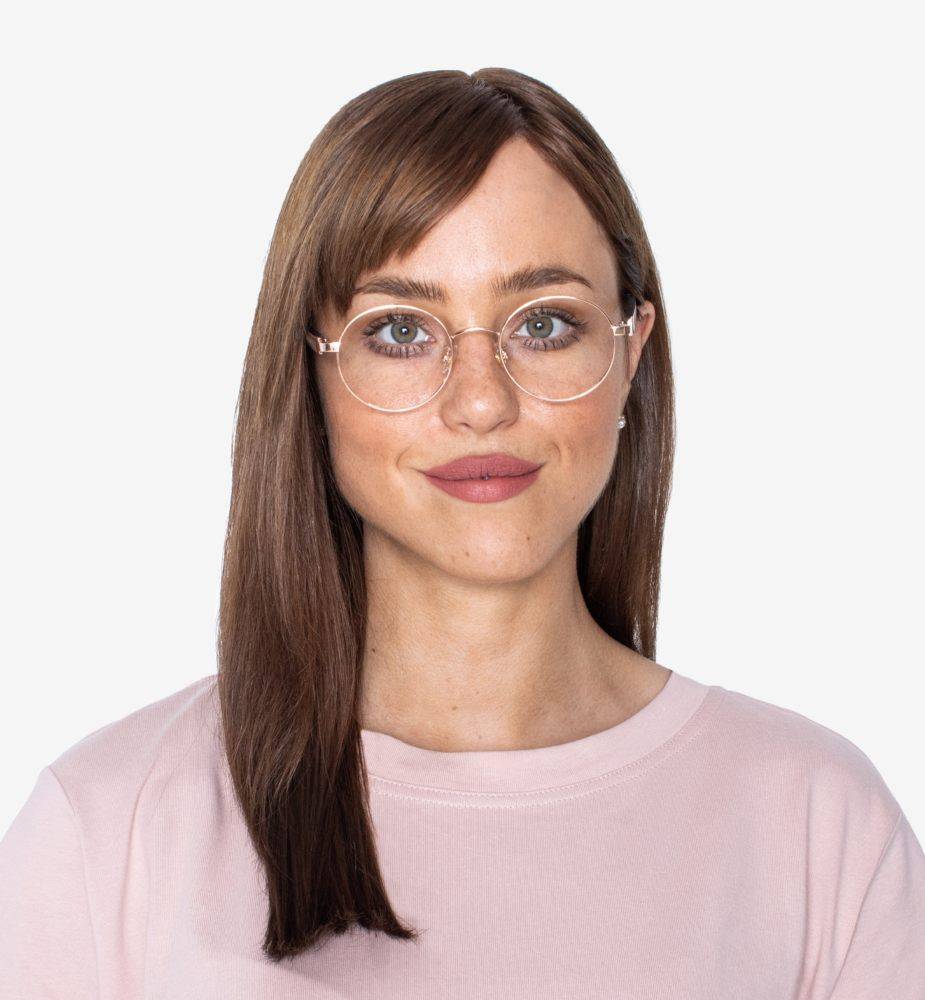 3. What You Should Know about Blue Light

People who are engaging with the outdoors on a daily basis have to deal with the long exposure of the sun in their eyes. The painful glares might eventually lead to visibility problems. Since blue light is a form of ultra violet light, prolonged exposure to it has severe consequences. Here’s what you should know about blue light:

4. Is Blue Light From Digital Devices Harmful to the Eyes?

Do you know that sitting in front of the computer or staring at your smartphone for long hours is not suitable for your eyes? This can lead to something called digital eye strain. Do you know the reasons behind it? Research shows that people tend to blink less than normal when exposed to blue light from devices. Therefore, fewer blinks lead to less moisture to the eyes.

In addition, the American Optometric Association explains how excessive use of a smartphone or tablet can lead to headaches, eye strain, dry eyes along with shoulder and neck pain. As mentioned earlier, too much blue light exposure can even interrupt your sleeping habit by overpowering melatonin. The former is a chemical which controls your body’s night and day cycles along with sleep and wakefulness. So, how badly do you need your blue light glasses now? 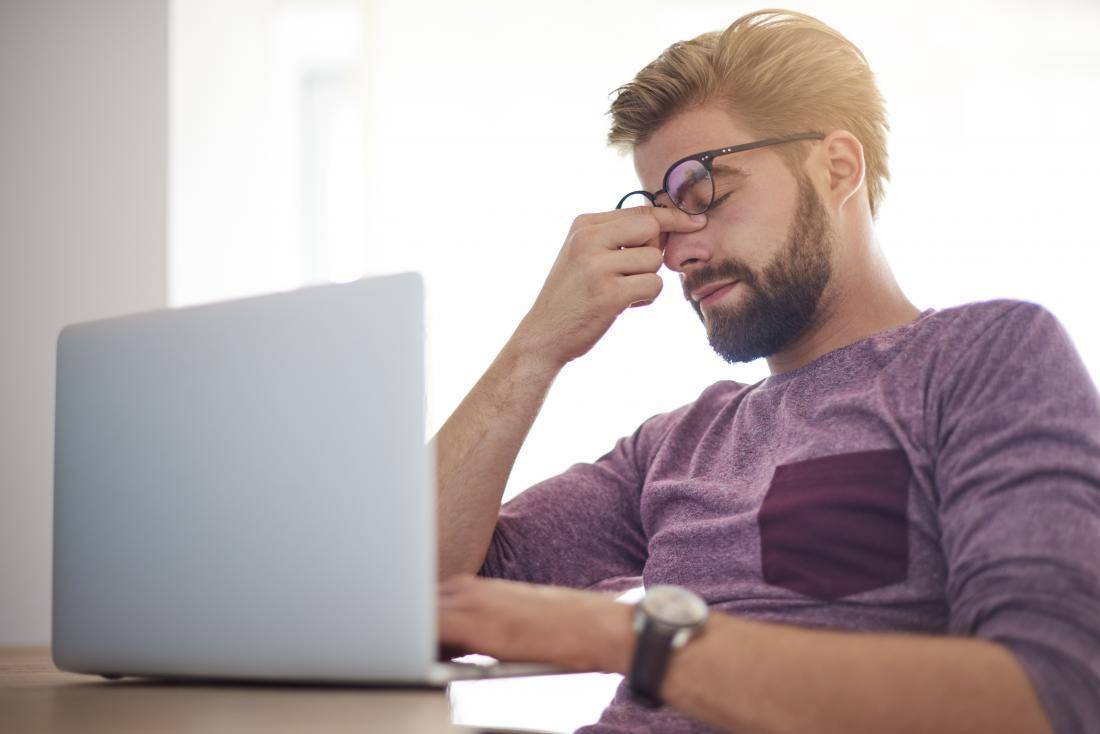 Every problem has its solutions, as dangerous as blue light may sound, there are numerous of tricks which you can do at home to protect yourself. Starting with the 20-20-20 strategy: Whenever you are using a gadget that produces blue light, stop every 20 minutes and focus on objects that are 20 feet away for 20 seconds.

However, the best option for you would be sunglasses, they are perfect just like women or men's blue light glasses. They can be very useful to block blue light in certain settings. Are you ready to explore how wooden sunglasses block light? How can they protect your eyes from damaging blue light rays? Can you keep your eyes safe from overexposure when using your digital devices? 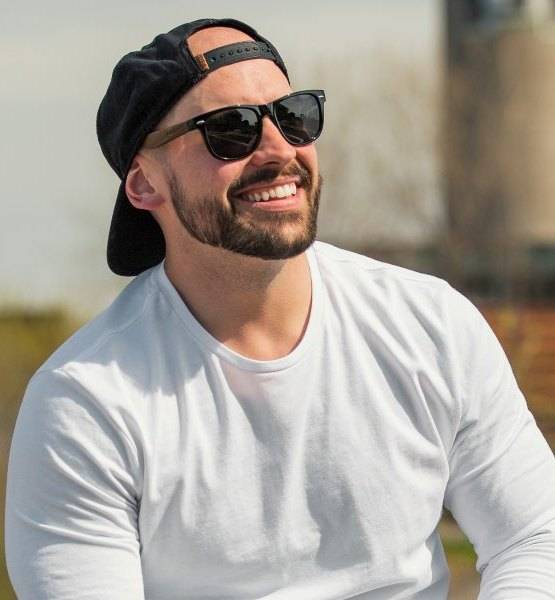 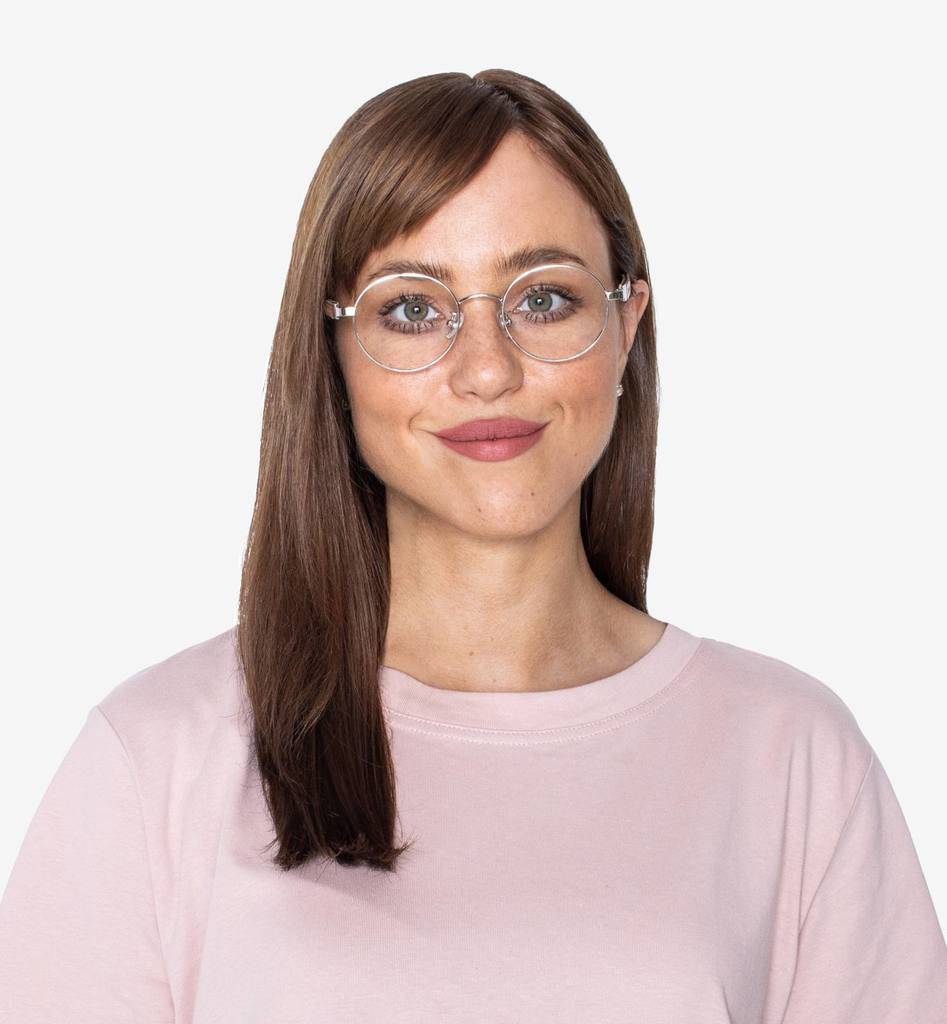 6. How Can Sunglasses Protect Your Eyes From Blue Light?

Most of the sunglasses are equipped with UV400 lenses that block 100% of the sun's UV rays and therefore, lessen glare. When it comes to reducing blue lights, some sunglasses can come in handy. They offer superior visual clarity and comfort while working on your computer or using any digital devices.

When shopping for shades, just like shopping for any blue light glasses, that can help block blue light; The number one rule would be to look for dark amber, copper yellow, orange or brown tinted lenses. These lens colours work perfectly to filter blue light and intensify contrast, making them great for outdoor and indoor activities. Remember the original rule though: Make sure your sunglasses work accordingly to your face shape. If you don’t know yours, you can discover in just 3 easy steps!

Back to the hot topic, we also advise you to ask your eye care provider for recommendations and lens coating options to make sure your sunglasses block both blue light and ultraviolet rays. Here's another frequently asked question: Do polarized sunglasses block blue light from computers? Avoid them. The polarization filter can distort your vision when staring at laptops, smartphones or other digital and LED screens. For more information on that, check out our previous blog the difference between polarized and non polarized sunglasses. 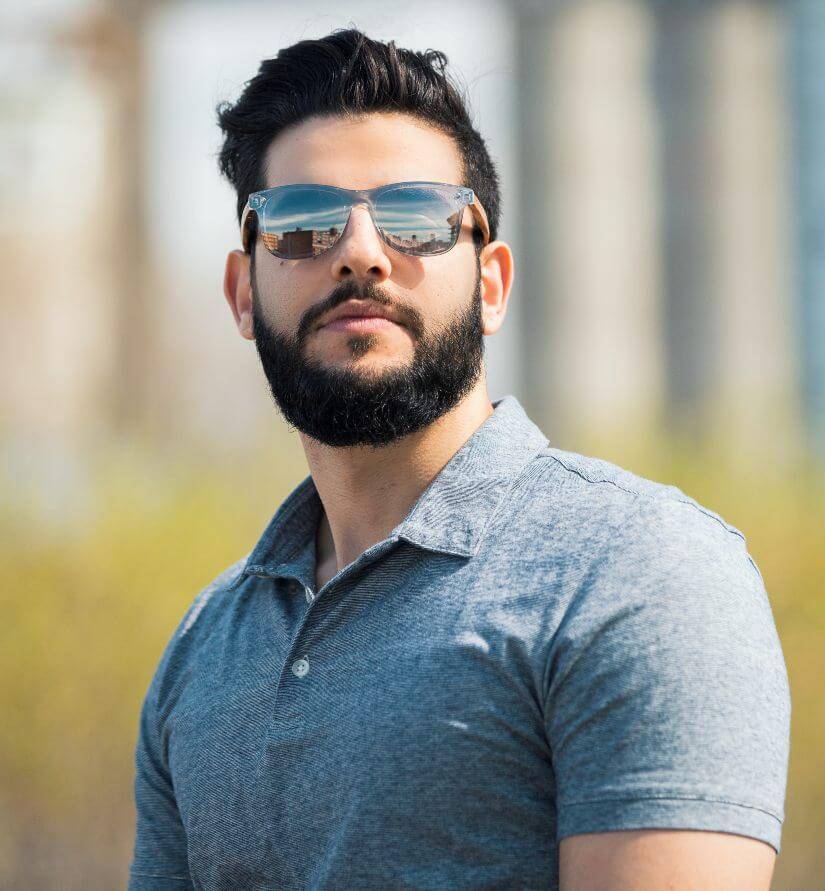 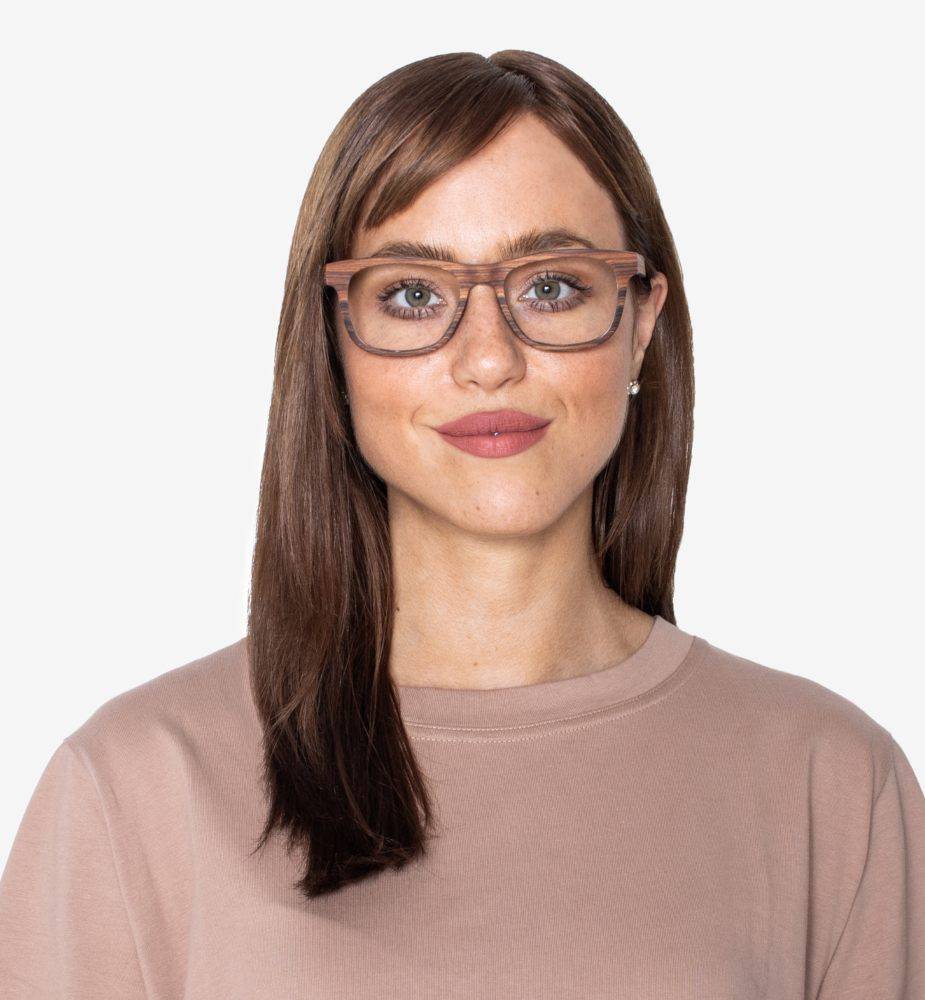 7. How to Use Sunglasses as Blue Light Blocking Glasses?

Now that we’ve established the idea that sunglasses can help protect your eyes from harmful blue light, you may wonder how effective these might be and how much protection they can provide compared to simple computer glasses or blue light glasses. The answer is simple: Sunglasses can be very effective in blocking blue light. However, this depends on the tints of your sunglasses’ lenses. It may not be the most practical option, especially in an indoor setting.

On the contrary, photochromic lenses will help you adjust the outdoor and indoor lights, protect you from the sun's harmful UV rays and provide protection from blue light from all digital devices or screens. If you are outside, sitting on your balcony or in a park and working on your laptop or staring at your smartphone, your sunglasses can be useful. They’ll protect your eyes from the sun's harmful rays in addition to the blue light rays emanating from your laptop screen or phone. If you happen to be indoors and using digital screens, then computer glasses or women and men's blue light glasses will give you better protection.

Would you like to have the best of both worlds? You’ll be able to have sunglasses outdoors and a protection from blue light indoors with photochromic! You can enjoy spending time outdoors and indoors while having your eyes protected at all times without having to remove or switch your glasses! 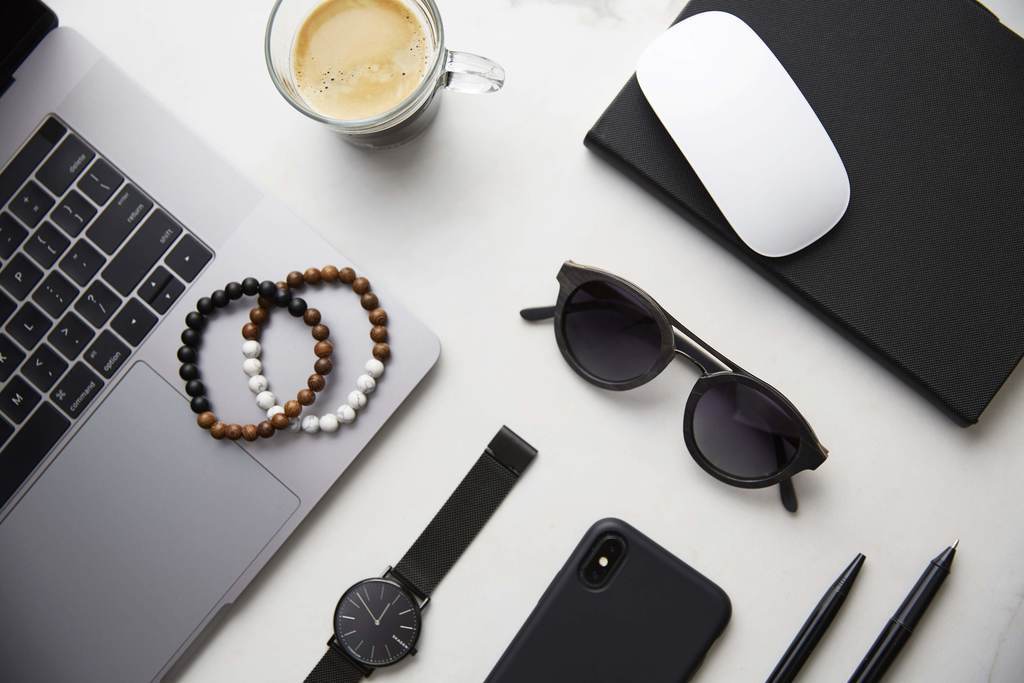 We did a pretty good job in covering the important parts regarding blue light glasses. Now that you have a clearer idea, it is best to keep our advice in mind and start applying them to your every day life! No person wants their sleeping cycle to be interrupted. Therefore, to prevent any eye strain coming from any digital device, take a few breaks every now and then or reduce your working hours if its possible. Try on your blue light glasses now, who would say no to a shopping spree?